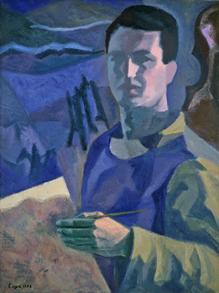 I have always felt comfortable with Valerioís canvases, ever since I first saw a splendid selection of them, at a one-man show in a bijou gallery in Groningen, a few years ago. In my mindís eye, his colours come to the fore, sometimes using warm pigments, at other times using surprisingly harder tones, yet mostly softly focussed. This makes for many intriguing and delightful surprises, first with colour and then in form, or both simultaneously. Quite often he leads one through a grand landscape, where the lines are clear but not clear cut. Your eyes explore left and right, and roam his strangely empty vistas, empty of people that is, but this is not to suggest there is not plenty going on in between those huge boulders, along that escarpment, over that curving shore or behind those lonely trees. Light, of course, is extremely important for mood, seen particularly in his treatments of contrasting surfaces, such as those found framed by doorways or through windows, often out onto sun-drenched planes. This present selection of works maintains his characteristic plasticity of form. They offer a degree of continuity by employing his traditional fine tonality and engrossing colour combinations to refreshingly new vistas, some old interiors and simple yet strikingly new perspectives.

We have a travelogue of topographies - back to eternal Rome, Italian coasts, North African settlements and so on, to urban life in the Low Countries. In other hands this might be seen as a clichť, but, here, the Colusseum sits quietly majestic and, over there, the Tiber is bridged almost effortlessly. The perspectives are cooly confident and the treatment is calm, at once familiar yet with hints of stark fluidity, which pull in the viewer and require further observation, typically so. The Tunisian vistas emphasize this duality. In the range of shadows are different depths of coolness, in complete contrast to the bone-dry sparceness of the sun-baked architecture. The curious view of a rooftop window does it for me the best: the exterior fulfills all expectations and could have stopped there, as a cubistís jungle of angles, but Valerios pulls back slightly and sets that scene against the plane interior plasterwork, of alien Prussian blue. He doensnít stop there for in that wall my eyes keep flicking to the mysterious, small, dark, square niche. It intrigues me, not as much as the delicate filigree ironwork, which is indeed impudently amusing, but real. These representations are true experiences, I understand, not imaginary codes. These composition are therefore authentic slices of his engagement with his surroundings, selected, stored away and now shown for further delightful contemplation.

I am sure I will not be alone in seeing a little of Edward Hopper in Valerioís atmospheric cafť interiors, a wonderful new series, which I look forward to seeing more of, in the future. There are hints, in truth, of many post-impressionist influences, including Paul Gauguin, Franz Mac and August Macke. It si not difficult to appreciate his amazing internationalism, in the choice of geomorphologies, in the stylistic nuances and in the breadth of subject-matter. The interiors easily draw the viewer in and I, for one, immediately find myself absorbed, naturally, sitting at the back of the cool Cafť Greco, probably nursing a tiny coffee cup with a absurd handle, intermitently trying to scrutinize an abandonned newspaper. The Cafť in Bruxelles offers us a different mood, more melancholy, yet there is clarity, rising up from the clutter of horizontal planes, represented by chair-backs and table-tops, along with that clever use of a long modern wall mirror. A narrative begins to grow, as our eyes pick out the clues and, as ever, are gently supported by the artistís deft handling of half-tones. We are actually intruding here on the young woman, reflecting on her emotional state, evidently. But, with the woman on the ferry the tempo is much quicker. This redhead is no shrinking violet. Valerio makes the whole scene bolder by emphasizing the strong dark verticals and some vivid horizontals. The perspective is straight forward. We are drawn irrevocably towards the central figure, with her shock of hair. Her pale flesh is flat yet carefully contoured, set off by the more powerful dark textile, tank-top. There is no movement but here gaze deflects the viewer. She does not look down but askance, out beyond the frame.

So, here we have a selection of excellent canvases that cover a broad geography and a set of personal encounters. They move us forward through the landscape at a steady pace, yet with plenty of interesting divertimento. There is no artifice, for he uses paint confidently, and it matters not whether it is architectural, sculptural or figure juxtapositional, the compositions show we are in safe hands and our journey will be more that satisfactory.